Below is one of the few videos of the late sociologist Peter Kollock giving a lecture that I know of.  It is a great example of Peter’s style: entertaining and rich with ideas and insights. The video captures Peter’s talk at Howard Rheingold’s Stanford class on “Literacy of Cooperation” – a review of computer-mediated collective action in Winter 2005. Peter speaks about strategies to avoid or resolve social dilemmas, covering the Tragedy of the Commons and Prisoner’s Dilemma situations, and applying these concepts to social media and Internet collective action.

A podcast from the Yi-Tan conference call was devoted to a discussion of Peter Kollock’s work.

If you know of additional videos of Peter, please send them my way!  marc-at-connectedaction-dot-net

When the late Peter Kollock and I published Communities in Cyberspace with Routledge in 1999 there were few broadband connections, no iPhones, and little WiFi.  Today, there is an ebook version of the book and Amazon sells a version for the Kindle, a device it was hard to even imagine when the book was written.  Google lets you browse most of it and search all of it.  But the key ideas of the volume:  identity, interaction, collective action and emergent order remain relevant in a wireless broadband netbook mobile social network real-time web world.  The book is now ten years old.

Introduction to Communities in Cyberspace, Peter Kollock and Marc Smith

“Since 1993, computer networks have grabbed enormous public attention. The major news and entertainment media have been filled with stories about the “information superhighway” and of the financial and political fortunes to be made on it. Computer sales continue to rise and more and more people are getting connected to “the Net”. Computer networks, once an obscure and arcane set of technologies used by a small elite, are now widely used and the subject of political debate, public interest, and popular culture. The “information superhighway” competes with a collection of metaphors that attempt to label and define these technologies. Others, like “cyberspace,” “the Net,” “online,” and “the web,” highlight different aspects of network technology and its meaning, role and impact. Whichever term is used, it is clear that computer networks allow people to create a range of new social spaces in which to meet and interact with one another.”

More details from the book…

END_OF_DOCUMENT_TOKEN_TO_BE_REPLACED

Professor Elinor Ostrom has been awarded the Nobel prize in Economics for her work on common pool resources (CPRs) and the management of shared resources.  Her work has great relevance for understanding the creation of many public goods on the internet.  She teaches at Indiana University where she is Arthur F. Bentley Professor of Political Science, Co-Director, Workshop in Political Theory and Policy Analysis, Professor of Public and Environmental Affairs, Part-Time, Co-Director, Center for the Study of Institutions, Population, and Environmental Change. 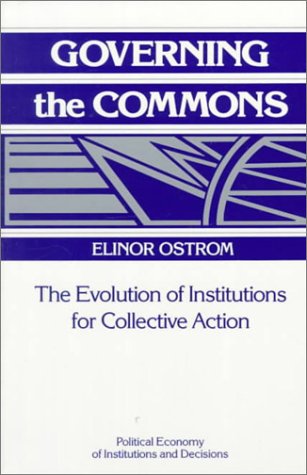 At the core of her extensive, empirical, research into the ways humans share common goods and resources is a set of eight core design principles.  These “8” principles for successful creation and consumption of a resource are documented in the book “Governing the Commons” At the recent ICWSM 2008 in Seattle I had an opportunity to present some thoughts about what makes social media social. The question is important because so many different types of interaction systems are considered social and they cannot all be the same thing. In an effort to categorize these systems one dimension that seems important is the size of the groups producing and consuming social media. In some cases on a single person creates an object that is then shared with many. In other cases many people create an object and then share it with just a few others. These dimensions open up a space in which different systems can be located and distinguished from one another. A common misconception is that social media is authored by a large group (for example that many many people contribute to a Wikipedia page). In practice, I think most social media objects are authored by individuals or small groups and are intended to be consumed by small or large groups (most Wikipedia pages attract only a handful of people to make regular contributions). In aggregate, these objects become collective goods — what most of the great stuff on the Internet is made of: archives, collections, discussions, data sets, and more collectively authored by potentially millions of people.

The emerging sweet spot may be the creation of objects through the activity of large groups (think of the movements of whole financial markets, or the contributions of behavior from millions of search engine users) that are then consumed by large groups (in the form of market data or optimized search results).

There are other dimensions of social media beyond the size of the producer and consumer populations and I will try to post about some others. The nature of the digital object being produced or consumed is an important dimension, as is the level of interaction possible. Over time I would like to construct a taxonomy of social media systems so that we can clearly distinguish between email, wiki pages and massively multiplayer role playing games, all of which seem to be labeled “social media”.